Fear began to grip me.  I started to panic that our strongest colony may be dead.  Dead bees could be seen all over the bottom board front entrance along with piles of a substance that looked something like saw dust but was not actually saw dust.  (My husband thought this could be propolis the bees were taking out of the hive.)  About three weeks ago, we installed feeding patties.  Scraps of the patty’s paper backing were also visible in the debris.  Small piles of dead bees were on the ground under the hive.  A few dead bees were also visible on the ground by Bravo and Echo, but Alpha definitely had more carnage. 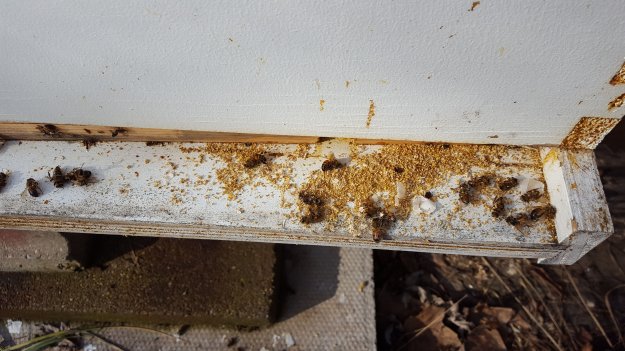 Keep in mind that Doug and I are first year beekeepers.  You don’t know what you don’t know.  Was this a normal amount of dead bees?  Not all bees make it through winter.  Maybe the loss of bees on a percentage basis was the same across the three hives.  How could I know?  I placed my ear against the hive and heard nothing.  More troubling than the piles of dead bees was the lack of activity at Alpha’s entrance.  Alpha was completely void of activity.  When I examined the opening, it appeared blocked by dead bees.  It was like a bee house of horrors. 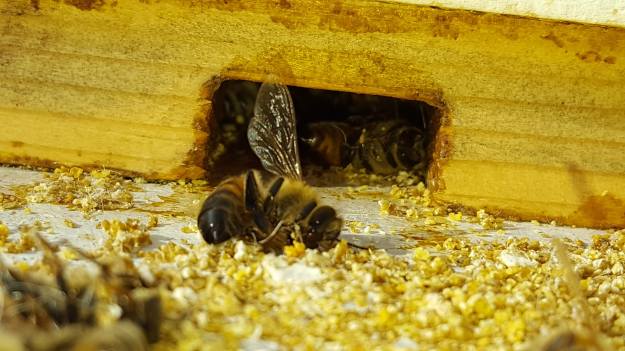 I checked the weather forecast and found that the next day was predicted to be sunny and warm.  I decided to return the following day with my smoker and bee jacket so I could take a peak inside the hives.  When I arrived to the hives with smoker in hand, bees were flying in and out of Bravo and Echo hives.  The bees in Bravo behaved as if it was a lovely spring day.  Alpha hive still had no activity.  I squatted down and pulled a dead bee out of the Alpha entrance opening, and a bee flew out at me.  The first sign of life from Alpha!  I brushed all the dead bees and debris off the bottom board entrance.  Alpha and Bravo hives have vented top boxes with a little door we can open to insert patties.  I opened the Alpha door.  No bees flew out from the hive.  When I put my face to the door, I could see a huge mass of bees.  They were alive but moving very slowly.  I couldn’t see any remnants of the old patty, so they must have consumed it all or had pushed the remains out of my view.  I removed the outer and inner covers.  There were small amounts of mold on the inner cover, presumably from condensation.  This was surprising to me because the top box is vented, and we filled it with burlap and pine shavings.  I carefully pulled the burlap and pine shavings away from the mesh that separated them from the bees.  I could see a huge mass of live bees.  The bees appeared healthy but moving slowly.  I put everything back in place.  I couldn’t insert a new feeding patty without disturbing thousands of bees, which didn’t seem necessary.

Next, I removed the door from Bravo’s top box.  Bees shot out of the hive.  The Alpha bees seemed lethargic, but the Bravo bees seemed very active.  I could see that there was still plenty of feeding patty left in the Bravo hive, so I closed it up and left it alone.  Next, I checked the Echo hive.  The hive was also full of live bees that had an activity level somewhere between Alpha and Bravo.  I could see lots of small hive beetles in Echo.  My assumption is the bees forced the beetles to this small observation window in the top of the hive.

The good news is the bees in all three hives are alive and appear healthy.  I have no idea why Bravo is so active and Alpha is so lethargic.  However, I did read one beekeeping blog warning new beekeepers not to get too disturbed by differences among hives.  The blogger cautioned that nature has variation and not all hives will behave identically.

I told my mother that if Doug and I successfully get all three hives through our first winter, it will be one of the proudest accomplishments of my life.  Mom thought that was laying it on a little thick, but I meant what I said.  That night at dinner my husband said with great enthusiasm, “Can you imagine how great it would be if we could get all three hives through the first winter?”  This is just one of the many reasons I love my husband.  We still have months to go, but for now the three hives seem on track.

7 thoughts on “Winter Hive Check – They Are Still Alive!”